If you want to understand augmented reality, or AR, think back to Google Glass. Released in 2013, the tiny eyewear-mounted heads-up display unit (HUD) was both a weathervane for what tech could do and a totem for the most über of übernerds. Information was projected onto the inside of a user’s eyewear and allowed wearers to check email, read texts, surf the web, and finally ignore their friends while still looking them in the eye. It was hardly a surprise when the consumer version tanked a few years later, due to a host of problems—etiquette and fashion notwithstanding—while the enterprise iteration still lives on.

The idea behind augmented reality (or AR) is that tech integrates and assists with the real world around you—less of an image of someone with a VR headset hiding in the basement and more like the 2016 sensation Pokémon Go. Yes, Pokémon Go was still a video game, but it got people outside, running around, and exploring the real environment around them. Though users eventually found a way to hurt themselves, it was still a (short-lived) success for getting-up-offa-yo-butt and making exercise fun via technology.

Created by Kopin—a publicly traded tech company with a background in transistors, DARPA projects, and wearable technology for the military and municipal sector—Solos’ AR was first announced a few years back as a Kickstarter project. While there have been other attempts at AR for endurance sports (the now defunct Recon Jet comes to mind, as does Everysight’s Raptor and Garmin’s Varia Vision) Kopin has pretty serious chops: For years, Kopin has produced HUDs for fighter pilots moving at mach speeds and firefighters saving lives, so it’s a safe bet that Solos can handle your morning training session.

So what makes the Solos unique? First off, the 4mm display is actually see-through, so there is nothing obstructing your view, except for the floating digits and graphs that can be repositioned based on preference and whether you’re in aero or not. The arm holding the display is not transparent, but it’s relatively slim, leaving peripheral vision intact. Triathletes have more room to rejoice because Solos says it will include a set of running capabilities including pace, distance, cadence, and running power when it hits the market soon (the prototype did not have running features, but it would be an assumedly easy software step). As useful as the cycling features are, seeing things like pace, heart rate, and distance traveled without changing stride to look at your watch almost seems more useful. As the Solos unit is lightweight at 68g, we had no bouncing issues during a test run.

While the Solos displays almost anything that pumps out an ANT+ or Bluetooth LE signal (distance, speed, cadence, heart rate, power, etc.), the new version also has a microphone alongside a near-field audio system—which was clear and loud, even on fast descents. This is useful because it allows for neat features like turn-by-turn navigation with a connected Android or iOS smartphone, but it also opens the door for an actual AR experience.

Aside from making and receiving phone calls while riding and voice control over functions, the true beauty of having a microphone and audio connectivity is being able to communicate with a coach or other riders in your group in real-time. (The shipped unit will have a group function with the ability to speak with up to 10 people.) While this doesn’t necessarily require smart glasses to do so, combining this feature with Solos’ “ghost rider”—a function that allows you to compete against your former self, Super Mario Kart-style—means that remote athletes can effectively create a virtual training partner to complement live, long-distance coaching. Imagine riding alone on a tough session alongside a better version of yourself and a coach to keep you focused. 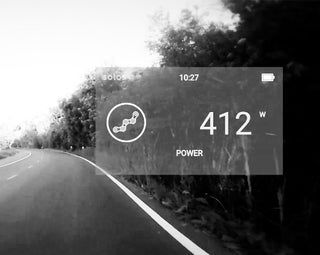 Despite initial reservations, the display did very little to distract us from riding or running; after only a few rides and some tinkering with the double-hinged arm, the HUD became second nature. Battery life hovered in the advertised range of five hours, the included lenses were clear and useful, and the built-in display graphs and stats kept our eyes on the road (finally, now we know in real-time when we’ve broken 50mph!).

While the included training app was fine, it certainly didn’t beat any of the existing major online training logs in terms of power or ease-of-use, so users already married to something like TrainingPeaks may simply end up exporting data in the end. Also, be aware that the unit requires a smartphone or similar smart device for most of the basic functions, so know that your smart device’s GPS will be active while training (add this to overt battery life considerations). Keeping in mind that the unit we used was a prototype, every once in a while the software needed a reboot, but we never lost ride data or had to unnecessarily delay the start of a session.

While Solos’ training rides can already be uploaded to Strava, we’d love to see the inclusion of Strava Live Segments—the premium Strava feature that shows users, in real-time, when they’ve begun a segment, their live position on the leaderboard, and other connected data—thrown into Solos’ system. This would certainly help the “ghost rider” function and populate the AR training world with thousands of Strava users and their virtual rides. In fact, Strava segment illuminato and ex-pro cyclist Phil Gaimon recently joined Solos’ team, teasing us about a possible Strava/SOLOS relationship in a press release: “With Solos technology, I have the power, heart rate and all of the key data I need right in front of my face for workouts and Strava hunting,” Gaimon said.

We’d also like to see Solos working directly with existing display units like Garmin or Wahoo—which would expand the usefulness of Solos’ information readout outside of their own operating system (and simultaneously solve the Strava Live conundrum). For a true live AR experience, we’d eventually hope to see athletes’ data broadcast in real-time to the coach or teammate on the other end of the line.

While Solos’ latest stab at AR may not be perfect, it proves that the pieces are coming together for AR in the endurance world. Virtual training platforms like Zwift have been on a sharp rise recently, but Solos’ product shows the possibility of mixing the virtual and the real worlds together. Imagine the “gamification” of getting kudos, chasing KOMs, and riding or running in virtual packs outside of the garage and out on the streets. In the future, you could go for a remotely linked ride or run outside with a training partner thousands of miles away or with the ghost of a pro who was in in your area months ago. The motivational double-whammy of group riding/running and leaderboards mixed with sunshine and wind in your hair would probably see more triathletes training more often and with better quality sessions. Übernerds rejoice.