SOLOS, the company behind the augmented reality sunglasses that have targeted cyclists, announced this week that it’s expanding to include a new set of metrics for runners, turn-by-turn navigation and two-way communication with coaches in real time.

The new generation SOLOS Smart Glasses will have more advanced display optics that put translucent data in the athlete’s field of view while they’re working out.

The Vista screen display measures four millimeters in height, the size of a human pupil, and casts a virtual screen with bright, high-resolution color graphics that don’t interrupt an athlete’s vision and are readable in sunlight.

Runners will be able to access key information about their run performance, such as elapsed time, speed, power, pace, cadence and heart rate for five hours before the battery runs out. 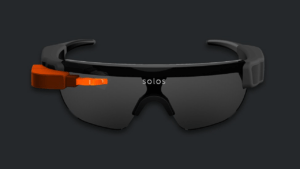 Also new with these glasses will be a coaching integration that enables athletes to set targets, connect to training programs and use the SOLOS platform to track progress. Audio and visual cues can be set up to offer live guidance prompts during training sessions, while an advanced group chat feature will enable multiple users to talk live with each other, or coaches to provide real-time guidance.

With earbuds and audio projection speakers positioned at the temples, athletes can command SOLOS using their voice to do things such as display relevant metrics or mobile notifications, make phone calls, listen to music, or receive audio and visual turn-by-turn instructions on routes.

The first SOLOS glasses, which are a unit of publicly-traded electronics maker Kopin Corporation, were the product of a Kickstart campaign and designed specifically for the cycling community with feedback from Olympic US Cycling athletes. The latest generation added in feedback from other early-adopter athletes, including runners.

“When you look down at your watch or bike computer, your form suffers; you slow down and this affects your finishing times,” Ernesto Martinez, program head for SOLOS, said in a statement. “Add to this taking the time to scroll through features on your smart watch, bike computer or music device, and those seconds start to make the difference between an average performance or your personal best.”

SOLOS Vice President Tom Futch said the company is looking to enter “many more sports” in the future, though he did not specify which ones the company would enter first.

SOLOS will be available this quarter and retail for $499.